In 2017 I rode the inaugural Pain Revolution Ride (PRR) from Melbourne to Adelaide as the oldest participant of about 25 riders. From the very first moment that I saw the ad for the event I knew it was something that I had to do. I ride my bike regularly for physical and psychological fitness as part of a Beach Road group of MAMWILs ie: Middle Aged Men (& Women) In Lycra. The PRR was the perfect combination of my chosen fitness activity and my obsessive interest in the clinical applications of pain neurobiology which has developed over the past decade or so. The PRR is not only a bike ride but an outreach program for rural communities. It targets both patients in persistent pain and those who manage them in presentations and discussions with these groups after riding over 100km each day. Further details on all aspects of this revolution as well as excellent resources relevant to contemporary pain treatment are available via – www.painrevolution.org

I confess to being one of the slower riders in my usual riding group based in Hampton called the Brown Cow crew, especially on the steeper roads. As a result, I over-trained for the 2017 ride, often topping the Strava list for the enrolled riders in weekly kilometres. The inaugural event was, as predicted, a ‘bucket list’ life highlight and well worth the long, sweaty hours of training.

Those who attended this year’s annual ACSEP conference would have heard Lorimer Moseley presenting as a keynote speaker on pain neurobiology and were hopefully as impressed as I was when I first heard him speak. I met Lorimer previously but the PRR was a wonderful opportunity to build on this relationship as well as commence relationships with many others sharing similar ‘revolutionary’ views.

Following on from the first PRR, the money raised has been directed towards the funding of a program aiming to harvest local pain educators (LPEs) in non-metropolitan communities. These have been matched to mentors in a process that will hopefully encourage and facilitate a neurobiologically prioritised model of care in these communities. I am privileged to be considered worthy of being one of those mentors and am assisting in the formulation of the LPE program itself. We hope that it will be developed further over the next few years with the intent to measure outcomes and broaden the program. More detail on this program is available via - www.painrevolution.org/local-pain-educator-program

In 2018, for various reasons, I found myself unable to commit to the required training for the second PRR, but it was a no-brainer that I still wanted to be involved in a support role for the event. Just prior to PRR 2018, I gave the third in my trilogy* of presentations at ACSEP conferences on pain neurobiology and models of care, supporting Lorimer in his keynote messages but with a SEP slant. Thankfully, once again the presentation was well received in obtained feedback. Given the wonderful alignment of the ‘exercise is medicine’ and ‘pain is protection; not damage’ messages, I proposed an ACSEP and PR ‘copulation’ and the metaphorical slide, which is copied here, received a wake-up chuckle from the audience as was intended. A similar response was obtained to this slide from the public audience in a presentation I gave in Canberra during the PRR 2018 event. It will hopefully imprint on those who were there that ‘PR fertilised’ SEPs are an excellent option to see for a safe and optimally effective re-adaptive program.

I am currently working on a paper which I hope to publish soon. It shares the title of my most recent ACSEP conference presentation. Discussions with Lorimer and others on the points I intend to make suggest that I am heading in the right direction so stay tuned! 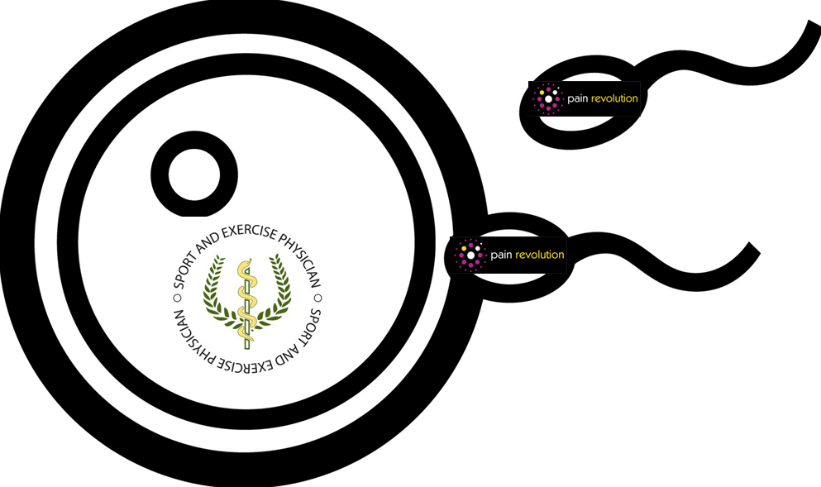 As in PRR 2017, PRR 2018 was full of so many highlights that an attempt to record them would produce too large a blog. From a personal perspective, major highlights included being in discussion panels with those I admire and have taught me so much, such as Dave Butler (of www.noigroup.com, Explain Pain and serious custard tart eating fame) and Lorimer Moseley himself, as well as Tasha Stanton, a Senior Research Fellow working with the Body in Mind Research group. There were many others on these discussion panels equally deserving of mention. 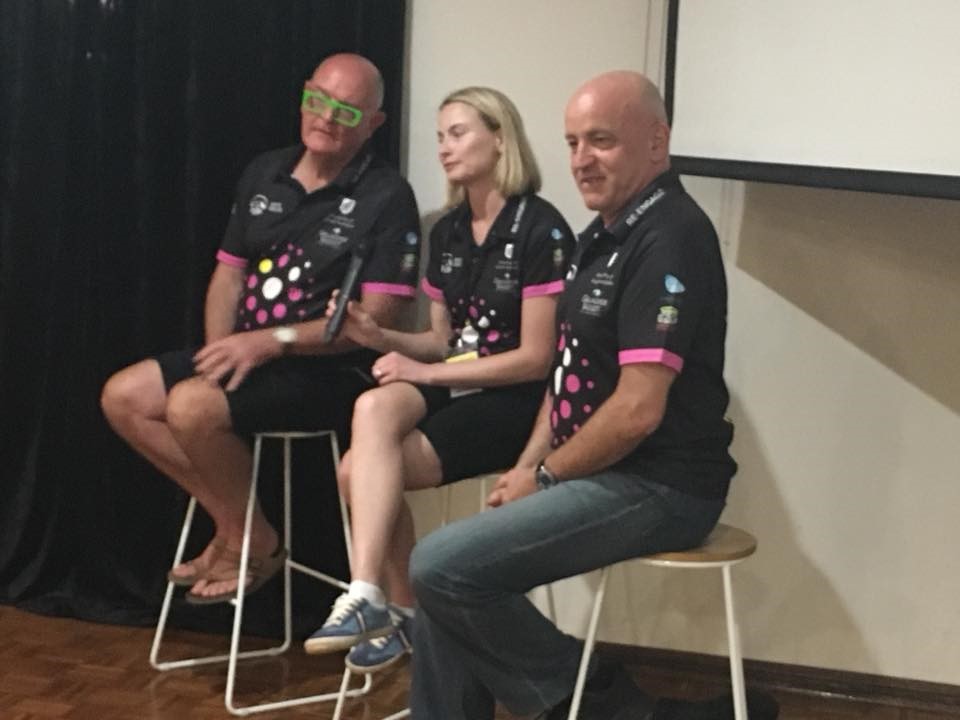 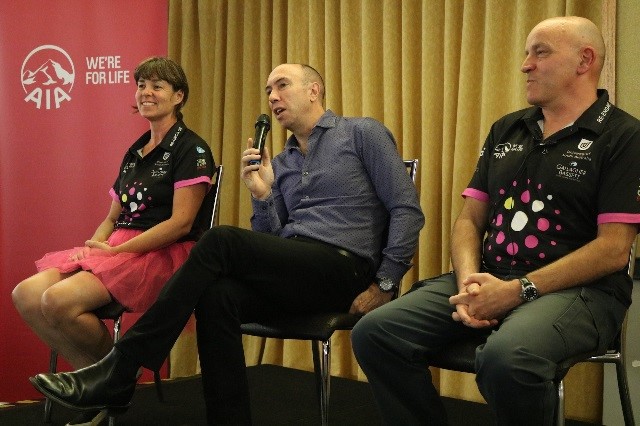 The PR mantra / slogan visible on all publicised PR material including staff and bike clothing is:

The educational component of this year’s PRR in support of this mantra was directed by Dave Butler and was intended to provide a curriculum-consistent message based mainly on two categories:

The target concepts were captured and summarised in a brochure provided to our audiences. This brochure attracted a notable tweet by a SEP who happened to be in the large Canberra audience, Larissa Trease: 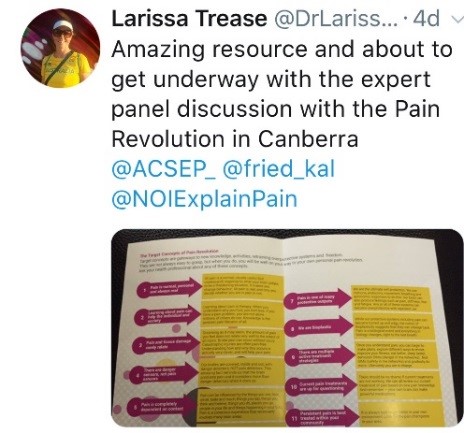 Dave’s pre-prepared ‘super-charged’* presentations provided the core messages, but presenters were allowed some latitude to provide their personal experiences and perspectives. In my presentation to the Canberra audience** I included emphasis on the important role that PR-fertilised SEPs could play as ‘pain coaches’ to obtain the best and safest re-adaptive outcomes. The important ‘buy-in’ of ACSEP as an official sponsor of the PRR was publicised by Lorimer et al frequently in a slide***, along with other official organisations including the APA (Australian Physiotherapy Association) and the APS (Australian Pain Society) who similarly support the PR message. Presenting immediately after Lorimer and having him there for my talk and up on the dais with me on the panel discussion afterwards was both daunting and exhilarating simultaneously.

*’Explain Pain Supercharged’ is a highly recommended text after the original ‘Explain Pain’ text. It is available with unfortunately no kickback to me via: http://www.noigroup.com/en/Product/EPSB 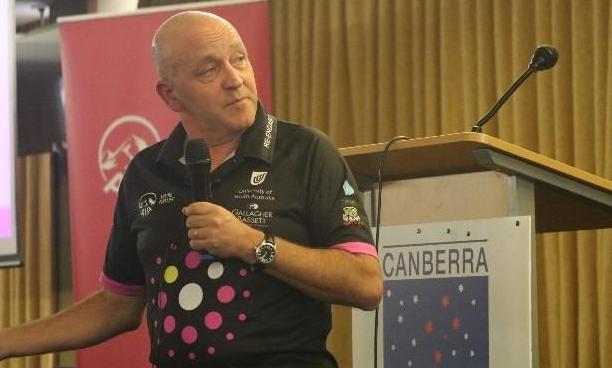 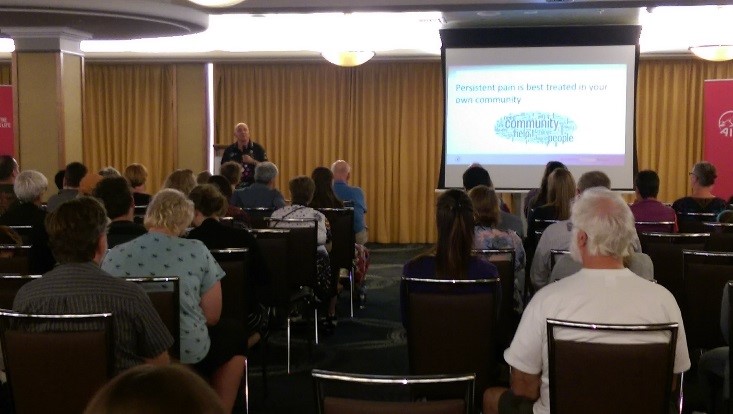 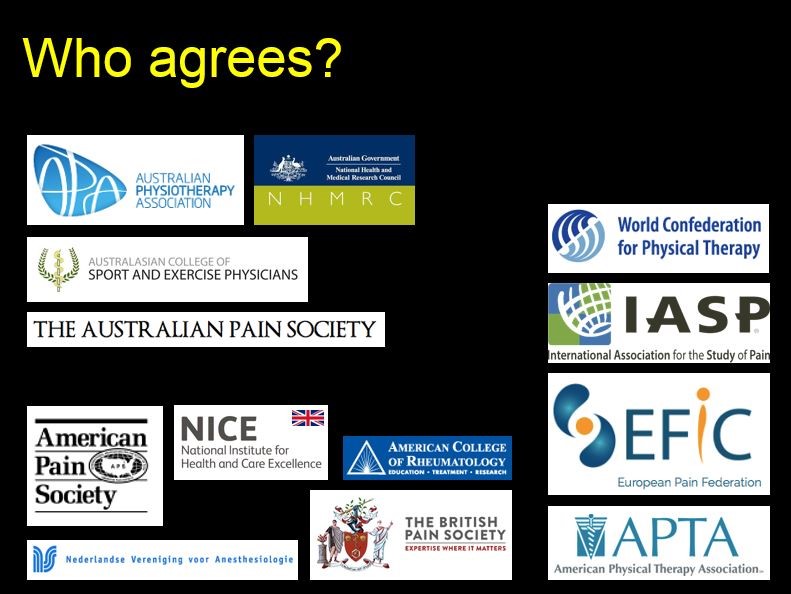 Fortunately, my role as the team medico of PRR 2018 was not tested by any serious events apart from a rather unusual necrotising hand lesion. This occurred in a delightful rider who had flown from South Africa especially for the PRR. She rode the first three days and partly on the last day despite needing a rather wide debridement for this awful lesion that may have taken out her extensor tendon/s if not surgically debrided in Canberra after some local knowledge assistance provided by David Hughes. This nasty condition and the rider’s unflinching response to the regular dressings afterwards amply supported the importance of contextual factors in pain.

Another integral component of the PRR is the ‘brain bus’. This bus precedes the riders into various town centres and offers the public a fascinating insight into the power of neurobiological processes using various interactive demonstrations, including virtual reality and the ‘rubber hand’ illusion. The bus (info available via - www.painrevolution.org/brain-bus) is mostly manned by Tasha Stanton and Dan Harvie. Like Tasha, Dan too is an impressive researcher and presenter. They have both taken time out from their important work to accompany the PRR in its first two years and are both great company over dinner at the end of the day. However, after a few drinks, Dan’s visual similarity to Jesus Christ becomes a bit disconcerting. 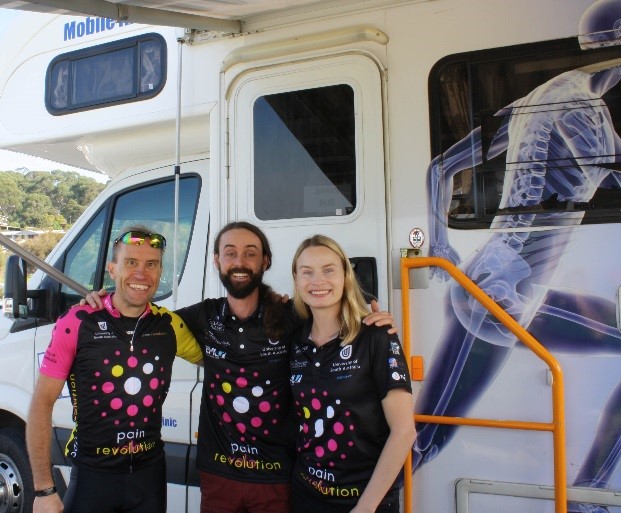 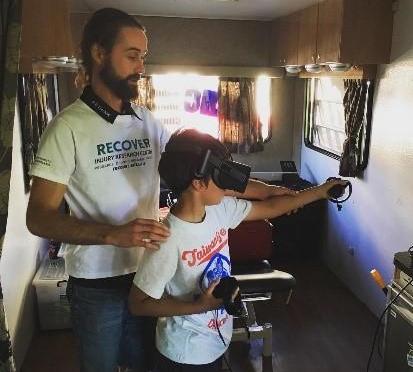 There was general concern in the PRR organising ranks as to whether it would be possible to re-create the extraordinary atmosphere of the first ride. At the conclusion dinner on the last night Lorimer addressed the revolutionaries with understandable emotion and was quite accurate in conveying that if anything, this year’s event surpassed the prior one in that aspect. Approximately 750km including 12,000 vertical metres was travelled in difficult weather and challengingly unhelpful winds. My day to day duties, in addition to medical support, included supporting the riders in a closely following vehicle matching their speed and radioing any potential dangers and traffic concerns. I have so much pride in the way the PRR 2018 riders overcame all difficulties in an uncomplaining and team-oriented manner. At times I could feel the struggle in each pedal stroke as if I was on a bike myself. Their jubilation on reaching Albury stirred emotional responses in many, including yours truly. Fortunately, on that final day the riders were rewarded with a perfect and relatively wind free autumn day. This stood out in contrast to early heat and humidity followed by rain and serious cold in the alpine region when passing by a mist covered Mount Kosciuszko. I doff my cap (‘chapeau’) in great respect to all involved in the PRR and to all who are working in our societies for meaningful change in the treatment of pain! 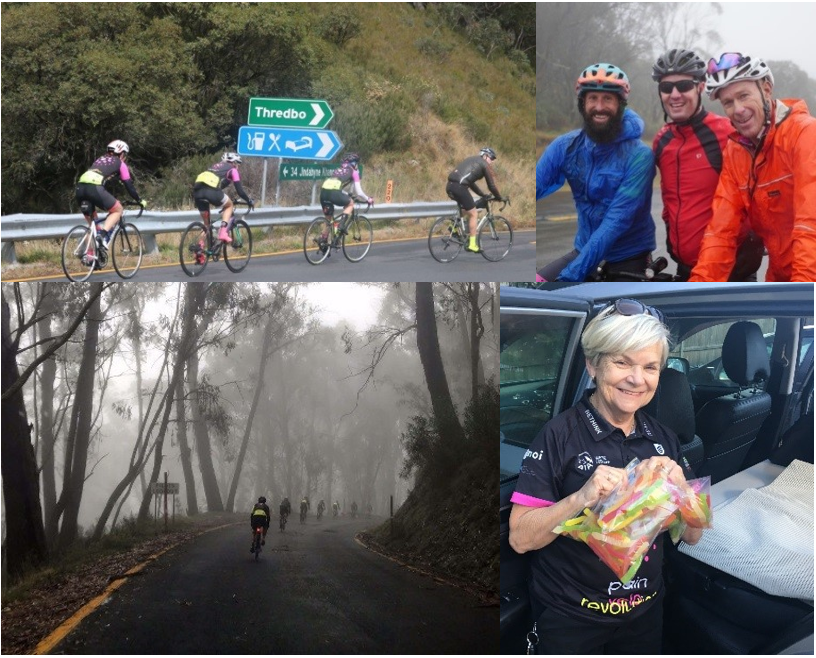 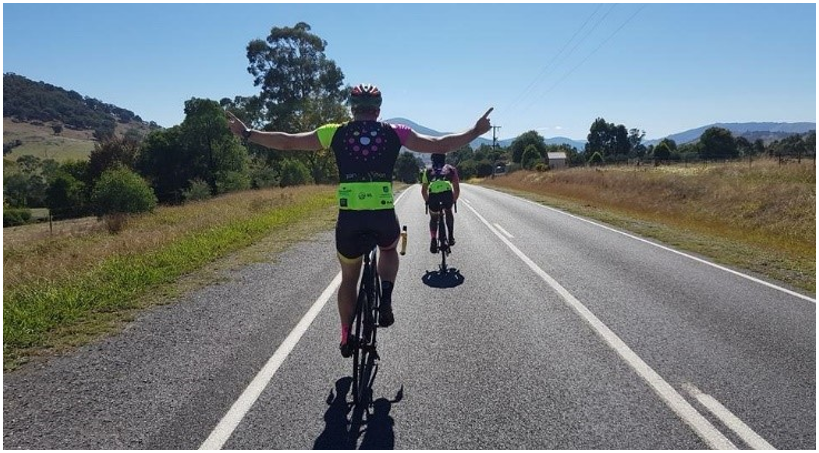 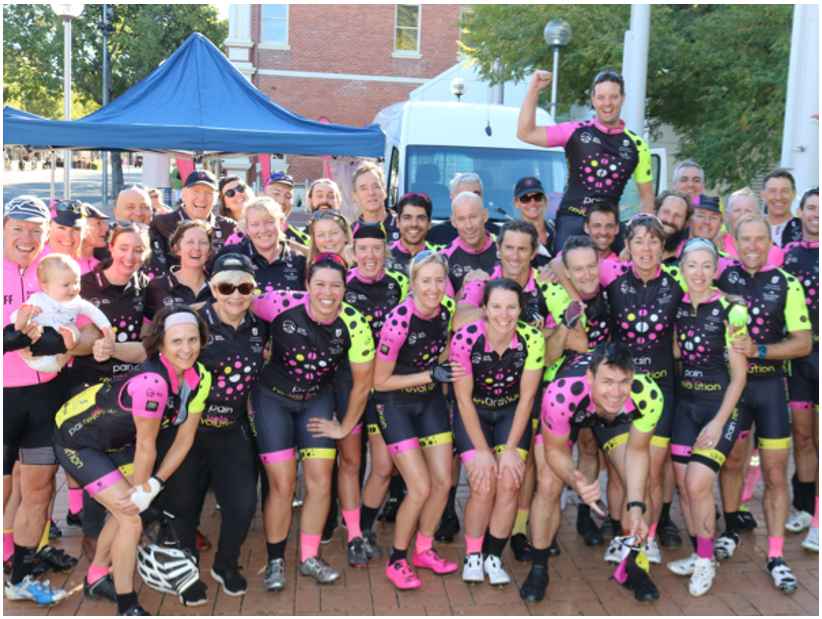